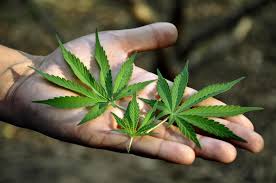 SEE LINK TO VIDEO OF THE MEETING BELOW
An attentive crowd came to this informative meeting on Tuesday, February 20, 2018, in Dining Room 1 of the Laguna Woods Village Performing Arts Center. Four speakers, representing a variety of viewpoints (see bios below), examined “Cannabis & California State Law 2018” and what the new legislation may mean for Laguna Woods Village residents, especially in the area of medication. Special attention was paid to helping seniors find an alternative to opioid prescriptions through the use of cannabis creams, oils, and edibles.

The meeting began with refreshments and was open without charge to all residents and their guests. Below is a summary of the proceedings written by Joan Milliman, GRF Secretary and an FOV Past-President.

BUT FIRST — AN IMPORTANT NOTICE TO OUR FRIENDS

Below is a summary of the proceedings written by Joan Milliman, GRF Secretary and a Friends of the Village Past President.

The evening began with Mike Straziuso, FOV President welcoming everyone and giving a brief history of Friends of the Village. He then turned the meeting over to Catherine Brians, Publicity Chair and former FOV President, who introduced the topic and speakers.

Explaining the main focus of the evening as “medical marijuana,” Ms. Brians reminded everyone that FOV is not an advocate for or against cannabis, but rather is interested in sharing information about a possible alternative to dangerous opioids. Overdosing on opioids, especially with the elderly, has become a national epidemic leading to many deaths. 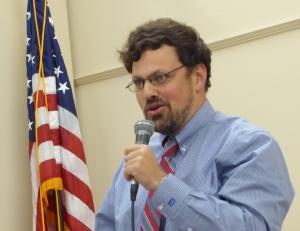 The first speaker was Attorney Jon S. Landis who spoke on the changing State and Federal laws regarding cannabis.

In Federal law, cannabis is still illegal. In fact, a January 4, 2018 memo from Attorney General Sessions revoked the idea of the government not going after cannabis users in states where it is legal to possess. But, Mr. Landis stated, the government has no money to do this, nor is there “political will” to do the same.

Before cannabis became legal this year in California, it could be purchased only for medicinal use. Now California allows anyone over 21 to purchase cannabis products for recreation and/or medicinal purposes. Mr. Landis warned, however, that it is illegal to transport cannabis across state lines. There are only about eight states where it is legal for adults.

Mr. Landis went on to say that industrial hemp is “more legal” with the government because it does not intoxicate. It contains CBD and is even sold by Walmart online. No state license is needed to grow this product, he said. He also warned that collectives are due to expire in 2019. 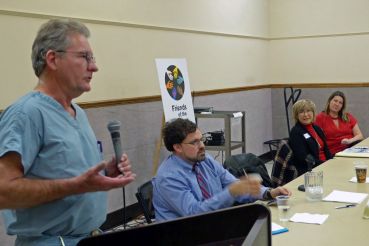 The second speaker was Dr. Kent Crawley from UC San Francisco. He identified cannabis as an “adaptogenic” herb which helps maintain or reach homeostasis and improve the quality of life. If used safely and in correct dosages, he said, cannabis can be very effective.

He reported that in 2017 the National Academy of Sciences looked at all studies on medical marijuana and found support for treatment of 1. chronic pain; 2. of results of chemotherapy; and 3. M.S. spasticity.

He pointed out that when the plant is heated, it produces THC, resulting in intoxication. CBD is what is used in medical marijuana and and is non-intoxicating.

Dr. Crawley also mentioned research being done by G. W. Pharmaceuticals in the U.K. Following is an excerpt from their website:

“GW has established a world leading position in the development of plant-derived cannabinoid therapeutics through its proven drug discovery and development processes, intellectual property portfolio and regulatory and manufacturing expertise.

“GW successfully developed the world’s first prescription medicine derived from the cannabis plant, Sativex®, now approved in numerous countries outside of the United States for the treatment of spasticity due to Multiple Sclerosis.

“The company has a deep pipeline of additional clinical stage cannabinoid product candidates for both orphan and non-orphan indications with a particular focus on neurological conditions.

“GW Pharmaceuticals was founded in 1998 and is listed on the NASDAQ Global Market (GWPH). The company has operations in both the US and the UK.”

Dr. Crawley said that cannabis needs to be regulated and tested for interaction with drugs and supplements, especially when used for medical purposes. 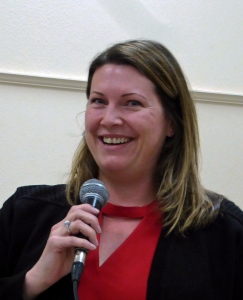 The third speaker for the evening was Kandis Hawes, Executive Director of Orange County NORML, a regional chapter of the National Organization for the Reform of Marijuana Laws (NORML). NORML’s mission to repeal the prohibition of marijuana at the local, State, and Federal levels by educating those in our community about marijuana and hemp and their potential medical and industrial uses, while promoting the responsible use of marijuana by adults.

Ms. Hawes spoke about various products now available and mentioned Bud and Bloom, a Santa Ana, CA, dispensary with which she is associated. Ms Hawes also mentioned a list of some 15 local physicians who can diagnose need for marijuana and give prescriptions for same. She told us about the free senior shuttle which goes once a month to Bud and Bloom from the public bus station off Paseo de la Valencia.

“Bud and Bloom offers a free shuttle from Laguna Woods to our location on a monthly basis. This program is designed to assist seniors with transportation and provide a social experience where seniors can shop in comfort with their peers. If you would like to be added to the next senior shuttle please email kandice@BudandBloomOC.com or call 714-928-9129.”

Ms. Hawes stressed that it is important to get the kind of cannabis/marijuana that is most suitable for your needs, and a knowledgeable doctor or dispensary staff member can help with that. Do you need a prescription to get marijuana? No, but having a prescription can save money and also help get the kind that is best for you, she said. 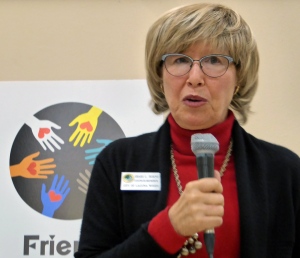 The final speaker for the evening was Laguna Woods City Council Member and former Mayor Shari Horne, who testified how much medical marijuana has helped her manage shoulder pain. Of all the forms of cannabis (smoked, sublingual, topical, edible) she said she has found a sublingual tincture that is right for her.

Ms. Horne mentioned that cannabis is far preferable to opioids for pain relief. She also told us that cannabis can act as an appetite depressant and is now being studied by UCLA and the Veterans Administration to relieve PTSD.

A productive Q & A followed and the meeting closed at 8:30 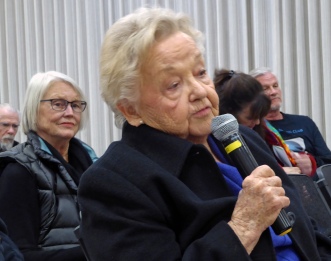 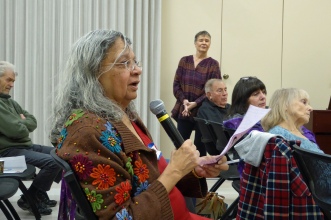 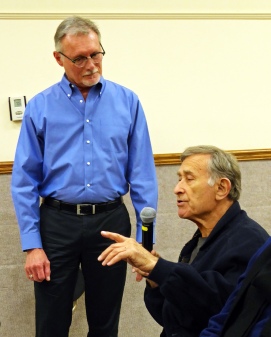 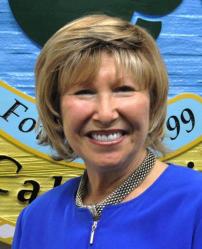 Sheri Horne has been an environmental activist and senior advocate since she and her husband moved to Laguna Woods in 2005. She has served as president of the Cannabis Club, advocating for seniors’ rights to alternative medication. She also organized climate change events and launched a recycling program in the community. Her first venture into city government was on the Greening of the Woods Committee. She was tapped to fill a vacant City Council seat in 2014 and became the city’s Mayor in 2016. She is also active in Friends of the Village, the Garden Villa Association, Concerned Citizens, the Community Civic Association, and other Village groups. 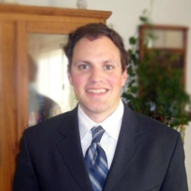 Jonathan S. Landis and the Bird Law Group of Costa Mesa have emerged as leaders in cannabis law in Southern California, representing clients ranging from dispensaries and delivery services to manufacturers, cultivators, and distributors, as well as ancillary services in the cannabis industry. The firm focuses on advising cannabis clients on compliance with local and California law, assisting them with local licensing, and preparing them for state licensing in 2018. Although Cannabis Law is an area of practice itself, it can also incorporate many of the other areas of practice Bird Law Group attorneys are experienced in. 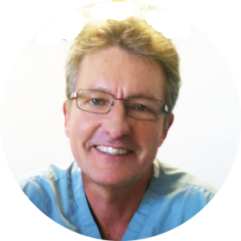 Kent Crowley, Pharm.D., is board-certified through the American Academy of Anti-Aging Medicine. He received his Doctor of Pharmacy from University of California, San Francisco, and completed his residency with Kaiser Permanente in Los Angeles. He completed a Fellowship in Metabolic and Nutritional Medicine in 2011. During his 34 years in practice, Dr. Crowley has worked in primary research at the University of California Irvine Department of Pediatrics, Division of Child Development, involved in the development of several drugs. He holds two patents in neuropathic pain and a patent-pending buccal delivery system incorporating cannabis.

Dr. Crowley currently is the Director of R&D at Silver State Trading in Sparks, NV, a 40,000 sq. ft. permitted cannabis cultivation and production facility. He serves as the CMO for the Palliative Care Corporation in Huntington Beach, CA, where he works with patients and physicians incorporating cannabis in disease state treatment and symptoms management, whether as a primary treatment or complementary to traditional and/or other modalities.

Kandice Hawes founded Orange County NORML in 2003 after losing her financial aid due to a possession charge. Since then, OC NORML has become one of the most accomplished chapters in the National Organization for the Reform of Marijuana Laws  organization, earning the 2012 Outstanding Chapter of the Year Award. Hawes holds a degree in Political Science and Public Administration from California State University Fullerton.

OC NORML has been instrumental in organizing the Medical Cannabis Conference for Seniors in Laguna Woods and the Know Your Rights Expo at the Anaheim Convention Center. The group holds three monthly meetings, sends speakers to city council meetings, assists students and journalists in research, and educates the public through informational booths and a weekly podcast, HempRadio, which Hawes co-hosts.

Hawes was named one of “Orange County’s 100 Most Influential People” by the OC Register in 2014 and one of the “100 Most Interesting People in Orange County” by OC Weekly in 2015. She served as Principal Officer of the Committee to Support Medical Marijuana Ballot Initiative Political Action Committee. The PAC qualified a voter initiative to replace the ban on medical marijuana collectives in Santa Ana and received 54% of the vote in November 2014.

“Isolation and Its Effect on Village Residents”

"The First 60 Days" with our new CEO Brad Hudson

"Shared Costs in the Village"

"Information Technology and the Village's Future"

"Meet the Candidates for Village Boards"